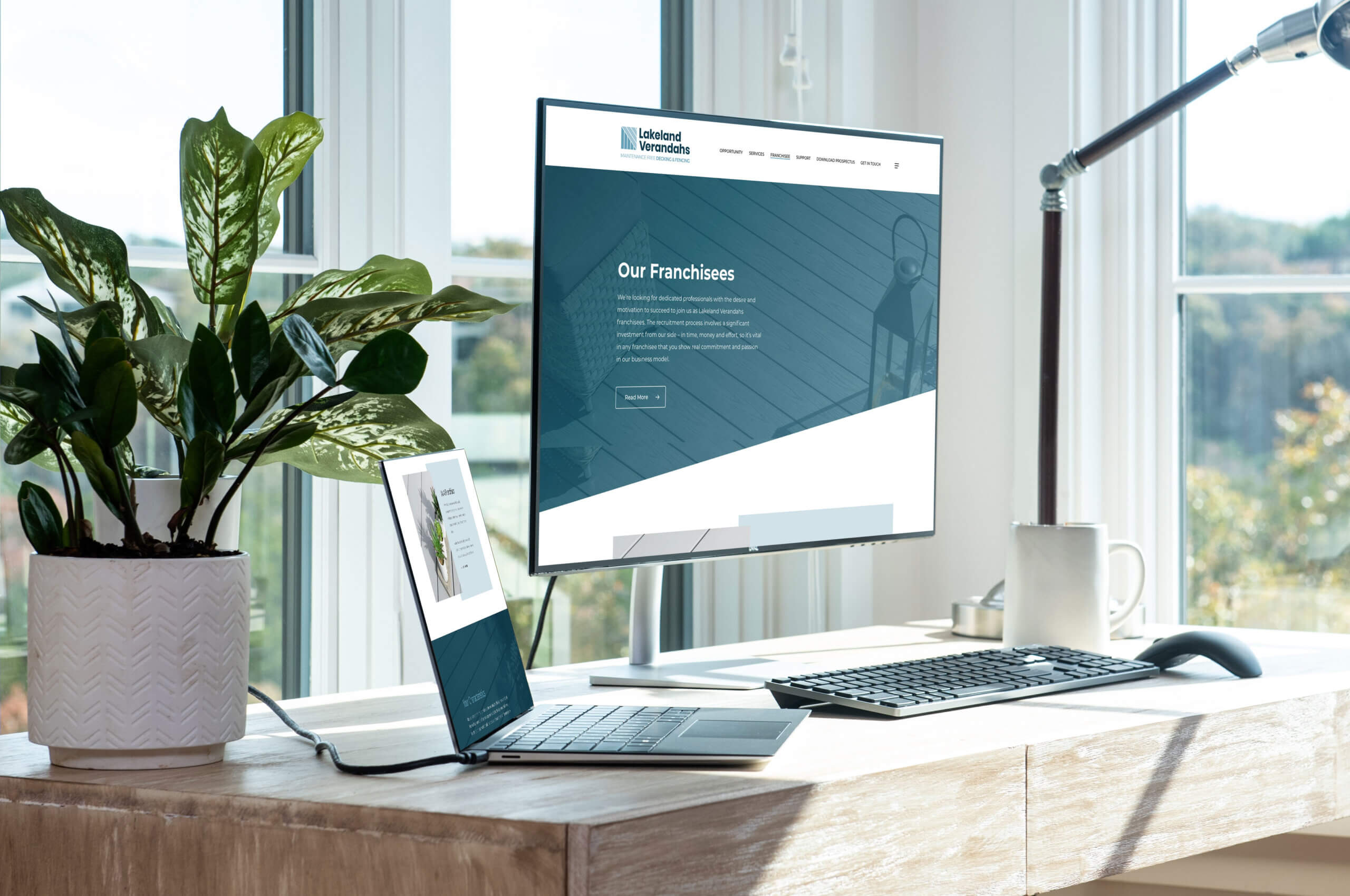 Lakeland Verandahs enjoyed their best year to date in 2020, accomplishing £3.5m turnover as the impact of Covid-19 failed to stop the UPVC decking and fencing company experiencing a huge spike in consumer demand for its composite decking.

It came after a record year in 2019 when DigitalKOG rolled out a new retail website for the business, aimed at the residential market, and began marketing the brand to consumers more heavily.

Lakeland has very big expansion plans for 2021, wanting to replicate the successful business model that we have jointly developed in the North West in other UK territories, and build a nationwide franchise network.

Supporting Lakeland’s ambition to move into a franchise model, DigitalKOG has supplied the Preston company with its own dedicated franchise website as part of a franchise recruitment lead generation strategy, and also refreshed the Lakeland brand.

Designed not to drive through consumer leads like their retail site, it exists instead to recruit business partners and help Lakeland build up a franchise operation.

The various sections within the website sell the franchisee dream to potential franchise owners, outlining in great detail the huge amount of business guidance that each franchisee will receive to give them the best possible chance to succeed in their area.

The support each franchisee will receive extends to everything from branding and marketing assistance to training opportunities and operational advice, all provided by an experienced management team with a well-established brand.

A LinkedIn account has been set up for the Franchise Network where our LEADOLOGY™ team is running a paid and organic advertising campaign to generate franchise leads.

”"The business has progressed so much over the last 18 months, and our fitters have been working flat out thanks to DigitalKOG’s lead generating skills.

"You would think we would be content with just being the dominant figure in decking in our region, but a foundation has been set to increase our presence more widely, and become the country's leading UPVC decking supplier.

"We're sure that the franchise-focused site that DigitalKOG has developed, together with the new branding, will help us attract the qualified candidates we need to establish a large, credible national franchise."

DigitalKOG Leadology™ Our Clients No Comments

We use cookies to give you the best experience on our website and to make sure the ads you see on other sites are relevant. By continuing, you agree to our use of cookies. Find out more here.
Cookie settingsACCEPT
Manage consent

This website uses cookies to improve your experience while you navigate through the website. Out of these, the cookies that are categorized as necessary are stored on your browser as they are essential for the working of basic functionalities of the website. We also use third-party cookies that help us analyze and understand how you use this website. These cookies will be stored in your browser only with your consent. You also have the option to opt-out of these cookies. But opting out of some of these cookies may affect your browsing experience.
Necessary Always Enabled
Necessary cookies are absolutely essential for the website to function properly. These cookies ensure basic functionalities and security features of the website, anonymously.
Functional
Functional cookies help to perform certain functionalities like sharing the content of the website on social media platforms, collect feedbacks, and other third-party features.
Performance
Performance cookies are used to understand and analyze the key performance indexes of the website which helps in delivering a better user experience for the visitors.
Analytics
Analytical cookies are used to understand how visitors interact with the website. These cookies help provide information on metrics the number of visitors, bounce rate, traffic source, etc.
Advertisement
Advertisement cookies are used to provide visitors with relevant ads and marketing campaigns. These cookies track visitors across websites and collect information to provide customized ads.
Others
Other uncategorized cookies are those that are being analyzed and have not been classified into a category as yet.
SAVE & ACCEPT
Powered by